One of the forthcoming volumes for The Santayana Edition is Volume 8: Three Philosophical Poets: Lucretius, Dante, and Goethe. As a research assistant here at the Edition, part of my work involves doing various tasks to help develop many of the future volumes. For example, I have reviewed transcriptions, numbered 1200 microfilmed pages of letters from a university archive, searched for references to important people and concepts to be included in upcoming volumes, inventoried file cabinets to create a finding aid, and searched through the filing cabinets for material to be published in a volume.

Today (4/13/2016) I was tasked by Associate Editor, Kellie Dawson with finding a poem that Santayana had written entitled “On the Three Philosophical Poets.” This task was a bit tricky; there was more than one cabinet and file where the poem might be. Since she said the poem was mentioned and attached to a July 6th 1936 letter to John Wheelock, I decided that finding the letter would be the best way to locate the poem.[1] Initially I thought that finding the letter in the file with copies of Santayana’s letters would be simple, but as soon as I opened the drawer I remembered that the letters were not organized by date or the volume they pertain to. The letters are instead organized by which institution holds the original letters. This was only a minor setback however because transcribed copies of the letters are digitized in searchable PDF format on the Edition’s server. I could see from reference to The Letters of George Santayana that Princeton has the letter in question, so to the Princeton file I went. The letters within the file were less organized than the drawer as a whole with the contents looking as though someone had tried to organize them by the book they referenced. Regardless of this fact, I found the letter tucked somewhere in the middle of the second Princeton file.

I felt triumphant that I had found the letter in a relatively short period of time, and Kellie was happy as well. And yet, my adventure (and the point of this blog post) does not stop there. As I copied the letter, I noticed that there was not one, but two copies of the poem (pictured below).[2] 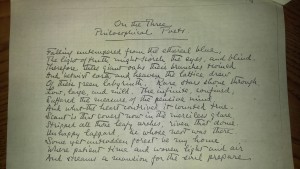 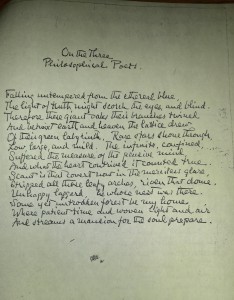 At first, I thought nothing of there being two copies of the poem, but nonetheless I mentioned it to Kellie as I handed her the copied pages. She, however, knew the significance of there being two copies of the poems. Apparently, as mentioned in the footnote of the letter (see below), when the letter was transcribed for Volume 5: Book Five, 1933-1936 (2003) only one copy of the poem was identified by The Santayana Edition as located. The copy of the poem on the left was thought to be unlocated at the time of publication.

Since I had such good luck finding this “lost” copy of the poem, I was subsequently tasked with finding the original 1911 copy of the poem which might have been in a letter from Santayana to Onderdonk (possibly archived at Princeton or Stanford). Sadly, there was not a copy of a letter from that year in the Stanford file. The Edition will contact Stanford University to try to find that letter and hopefully another copy of the poem, but I can still find solace in the fact that I found something previously “unlocated.”

Update 4/19: We have heard from Princeton that the original poems are not in their library’s collection with the letter. We’re still hopeful Stanford may have what we’re looking for.

Update 4/21: We have heard from Stanford.  They have sent us a facsimile of the then-untitled 1911 version of Santayana’s poem “On the Three Philosophical Poets.” We see now that Santayana clearly revised this version before sending off the above versions to Scribner’s to appear in the Triton Edition. Pending approval from Stanford, we will use a facsimile of this poem as the frontispiece for our forthcoming volume and add a transcription here.

Dear Mr. Wheelock
Enclosed is the contract for the special edition of my “Works”, signed & witnessed: the essay on Bishop Berkeley: an autograph version of the sonnet On the Three Philosophical Poets: another copy of this in my ordinary handwriting, in case the other seems cramped.1 I was not sure whether the reproduction can vary the size of the original or not, and for that reason made the autograph version fit the proposed page.

I have signed all the sheets now, and will see at once about sending them back to you. The two remaining prefaces will follow soon.

Mr. Bonamy Dobrée, who had the enclosed copy of the Berkeley made for me says he thinks his book, From Anne to Victoria, will appear in October, and that his publisher expects that the contents shall not have appeared previously. I have replied that I suppose the limited edition of my .Works. will not be ready until well after that time, but that I would inquire of you about it. As the Berkeley was written for Mr. Dobrée’s book, I couldn’t very well print it elsewhere first. Mr. Dobrée has no objection to the publication afterwards.

On the Three
Philosophical Poets.

Falling untempered from the ethereal blue,
The light of truth might scorch the eyes, and blind.
Therefore these giant oaks their branches twined
And betwixt earth and heaven the lattice drew
Of their green labyrinth. Rare stars shone through,
Low, large, and mild. The infinite, confined,
Suffered the measure of the pensive mind,
And what the heart contrived it counted true.
Scant is that covert now in the merciless glare,
Stripped all those leafy arches, riven that dome.
Unhappy laggard, he whose nest was there.
Some yet untrodden forest be my home,
Where patient time and woven light and air
And streams a mansion for the soul prepare.

Adelea Willman is a Master’s student in English and Documentary Editing.  She has been an intern at the Santayana Edition since 2014.