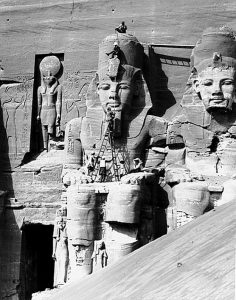 . . . I am at this moment going up the Nile with an impossible party of tourists, conscious of being no less grotesque myself than the rest of them. So many labour-saving-machines have left us no time for anything, else I should like to travel long in the East and yield for a time to its fascinations. People here seem to realise something of Faust’s dream, to be young in body and old in spirit. What an amusing place the world would be to such a creature. We sometimes speak of regretting lost illusions. What a silly idea! We may well regret lost powers, but the loss of illusions is an unmixed benefit. It leaves you free face to face with the facts and authorizes you to profit by every real opportunity. The trouble is that, the Life of Reason being so largely in abeyance, people do not ordinarily lose their illusions till they have lost their passions, and then the real world, when they see it for the first time as it is, seems to them stale, not because it is real but because they are played out.

I may perhaps go to Jerusalem and Damascus before returning to Europe. The donkey is losing its terrors for me and I now generally ride at the head of the party. Think what a party it must be!

From The Letters of George Santayana:  Book One, [1868]-1909.  Cambridge, MA: The MIT Press, 2001.
Location of manuscript: The Houghton Library, Harvard University, Cambridge MA.