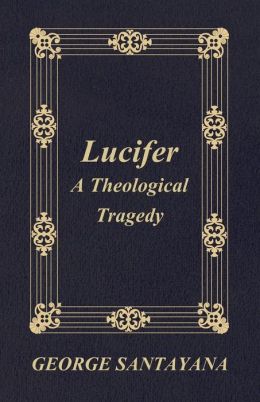 Dear la Rose¹
It is a great pleasure to receive your letter. From time to time I have felt an impulse to write, or to send you a book–particularly the Soliloquies–but the small impediment of not knowing your precise address or some other trivial obstacle has always intervened. Not long ago Lapsley and I spoke of you at length, and with a unanimity of sentiment which he and I are now developing on a good many subjects. Anglicanism not included, although even there we seem to have an inexpressible depth of agreement beneath the tacit disagreement of our opinions. I mean that I think I know
why he believes, and he thinks he knows why I disbelieve. It is a sympathetic opposition.
As to the occasion of your letter, what could be more grateful to a parent than the resurrection of a dead child? I have not yet received Fituski’s books,² but I am sure the outer form he would give to Lucifer would be more than satisfactory. Not long ago some one sent me a copy with a request that I should write something in it, and before doing so I reread the whole–which I hadn’t done for many years. My impression was that I had done what I meant to do, but that here and there feeble or unfortunate phrases occurred. I should not venture to suggest revision of the style. I should do it much less convincingly now; but perhaps in the proof we might change a word here and there, to strengthen the rhythm or avoid platitude. If you have marked any very bad places, I should be much obliged if you would point them out. Duffield has the copyright, but as he has disposed of that of the Sonnets I expect he would make no bones of getting rid of Lucifer as well. As to the $200 which you offer me, I should much rather take nothing, and let the money remain to insure Mr Fituski against loss in his venture. I have much more money than I need in my manner of life, which is that of the perpetual travelling student: so that do not let money be mentioned in this pleasant affair.³
Since you say you have 20 volumes of mine (which I think is more than I have written) I infer that you have various editions of the poems: if you have not the nice one (in white and gold) of the English edition published last year, will you let me know and I will have one sent you? Or would you prefer the English edition of the Soliloquies? I meant to send it you (it is probably much nicer than the American) only there is the circumstance of passing the custom-house–which, however, I can get round without trouble.
I am at work on many things, including a novel about which I should be particularly glad of a chance to talk with you. Don’t you ever come to Paris? It would be such a pleasure.
Yours sincerely GSantayana

1. Pierre de Chaignon la Rose (b. 1871) was one of Santayana’s Harvard friends (A.B., 1895) and a lecturer in Harvard’s English Department (1897–1902). Santayana described him as a man of excellent taste and talent as a designer (he designed the 1924 edition of Lucifer). (Persons, 407.8)
2. Maurice Firuski worked at Dunster House, the publishing firm in Cambridge, Massachusetts, which issued the new edition of Lucifer in 1924.
3. Dunster published a revised version of Lucifer in 1924. The headpieces, initial letters, and end papers were designed by and the typography arranged by La Rose.