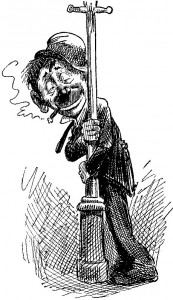 Dear George,
Just a word to say I have received your yearly account, and am much pleased at the favorable aspect of it. The decline in value seems to be, in my property, only about one percent, which is remarkably little under the circumstances. I gather from what you say, and from the enclosures, that this panic was not so much a crisis in industry–and these have to occur sometimes, as now in England–as a reaction from the speculative inflation of the previous year or two. It has been like what I used to see at Harvard dinners in those disgusting old times before prohibition, when people had had some sherry-cobblers in the afternoon, some cocktails before dinner, much champagne with their food, and several whiskeys-and-sodas afterwards, besides some green-mints or other liqueurs, whereupon they “put their lunch”; a loathsome phrase and a loathsome thing which I daresay you have never seen or heard. The market has put its lunch, and probably feels the better for it, even if still a little disturbed.