Katarzyna Kremplewska’s George Santayana’s Political Hermeneutics (Brill, 2022) is a comprehensive study of Santayana’s political philosophy as found in Dominations and Powers (1951) and dispersed throughout his other works. Managing necessity and harmonizing diversity, negative anthropology, an Apollonian individualism and naturalistic humanism, are only a few of the interpretative categories used to elucidate the dense, ambiguous and ironic ruminations of Santayana and reveal their timeliness. Discussion of other thinkers—from Plato to Ricoeur—brings to light the essentially dialogical character of his work. 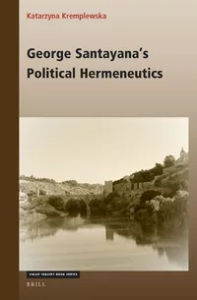