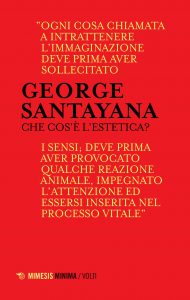 This translation of Santayana’s 1904 essay, “What is Aesthetics?” summarizes his classic The Sense of Beauty (1896). On Santayana’s view, aesthetics grows out of the whole of experience giving it a priority in understanding human life. Art and beauty, therefore, have their proper place in concrete human life. Guisppe Patella (Professor in the Department of Literature, Philosophy, and Art History, University of Rome Tor Vergata) provides an introduction and afterword that gives account of Santayana’s thought and situates the piece in the context of Santayana’s work.

Katarzyna Kremplewska’s new book Life as Insinuation: George Santayana’s Hermeneutics of Finite Life and Human Self (SUNY Press, 2019) presents Santayana’s understanding of the self in the context of a philosophy of life. The work examines the tension between the possibility of self-integrity and the tragic character of human life. Kremplewska demonstrates a keen knowledge of Santayana’s written works that is impressive in its depth and breadth, and she is extremely conversant with the secondary literature. She places Santayana in a European context by considering his work in relation to that of Nietzsche, Bergson, and Heidegger. The book is a major contribution to Santayana scholarship.

The Life of Reason in an Age of Terrorism (Brill, 2018) is a newly published collection of essays based on the conference hosted by the Berlin Practical Philosophy International Forum in the summer of 2016. The book was co-edited by George Santayana Society members Charles Padrón and Chris Skowoński and includes several contributions by writers who have previously published in Overheard in Seville. 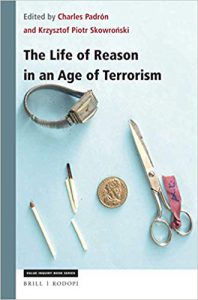 The Modern Language Association (MLA) Committee on Scholarly Editions has awarded the critical edition of Three Philosophical Poets: Lucretius, Dante, and Goethe, Volume VIII of The Works of George Santayana, its seal designating it an MLA Approved Edition. The seal acknowledges the accuracy, appropriateness, explicitness, and consistency of editorial procedures that insure the publication of reliable texts. Every critical edition of The Works of George Santayana has earned MLA approval.*

The George Santayana Society (GSS) is pleased to offer a prize for outstanding scholarly writing in honor of Professor Angus Kerr-Lawson. The prize is offered in tribute to outstanding contributions made by Kerr-Lawson to Santayana scholarship published in Overheard in Seville: Bulletin of the George Santayana Society. Any scholar not more than five years out of graduate school is invited to compose an essay of approximately 6,000-8,000 words engaging the thought of George Santayana. Authors may address any aspect of Santayana’s thinking, including (but not limited to) other figures and concepts in the American tradition (and beyond); themes such as materialism and naturalism, realism and Platonism, literature and art; and/or issues connected to American intellectual history and American culture. The winner will be awarded $300 and will be invited to present the winning paper before the George Santayana Society at its annual Eastern APA gathering in January 2018. Additionally, the winning paper will be published in the subsequent edition of Overheard in Seville: Bulletin of the George Santayana Society. Runners-up may also be invited to submit their entries for Bulletin publication. The winner and runners-up will be notified in September, 2017. Authors should prepare submissions for blind review and send them electronically in Word format to: mflamm@rockford.edu. The subject line of the email should read: “Kerr-Lawson Prize Submission, [author’s name].” Deadline for submissions is May 21, 2017.